Overanalysis – Bill and Ted’s Hope for the Future 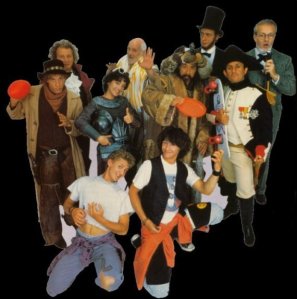 Bill and Ted’s Excellent Adventure may be one of the best time travel movies ever.

It’s a fun 80s comedy about two loveable idiots who travel through time in a phone booth, kidnapping historical figures for their history report so they can keep their band together.  It’s quirky, it’s hilarious, it’s quotable, it doesn’t take itself too seriously, and it mixes in just enough historical fact to suspend our disbelief while still having fun with these characters. 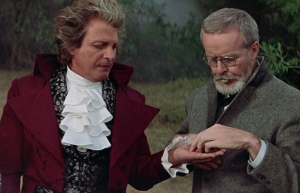 You could say it goes deeper, offering hope that our future will be better thanks to these two and their music (which gets better, we promise).  But it’s kind of a stretch to believe that even the most bodacious rock band could align the planets, let us talk to household pets, and lead to an increase in excellent waterslides.  It’s just a fun, goofy movie.  Or is it? 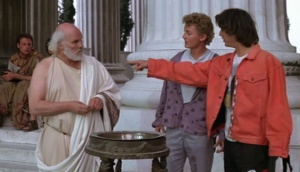 The historical figures in this film did great things, but their lives weren’t so great.  Napoleon Bonaparte was defeated, dethroned, and exiled.  Billy the Kid was caught and gunned down by the law two years after his time-traveling exploits.  Socrates was condemned as a menace to Greek society and sentenced to drink poisonous hemlock.  Sigmund Freud died of cancer from smoking too many of his iconic cigars.  Ludwig van Beethoven was already losing his hearing when Bill and Ted picked him up, and he eventually went deaf.  Joan of Arc was tried on a trumped-up charge of heresy and burned at the stake.  We don’t know for sure how Genghis Khan died, but it may have been the lingering effects of injury or infection, and he never saw his empire reach the peak of its glory.  Abraham Lincoln was assassinated after a long and cruel war.

All these people were destined to suffer tragedy in their own personal futures.  They would never see the results of their efforts, never know what all the hard times were for.  Or would they? 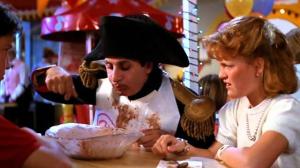 Suddenly, Bill S. Preston Esq. and Ted Theodore Logan drop into their lives and took them to a far distant time.  Napoleon got to experience the child-like joys of Neapolitan ice cream and waterslides.  Billy the Kid got one last grand adventure, one he never would have thought possible.  Joan of Arc saw a world where women were equals, where they could join together in their own army of sorts, even if only for aerobics.  With his last vestiges of hearing, Beethoven heard the future of music.  Socrates, accused of corrupting the minds of youth, got to meet the teens yet to be born who would learn his wisdom thousands of years after his execution.  And Abraham Lincoln witnessed his Union, still intact and stronger than ever. 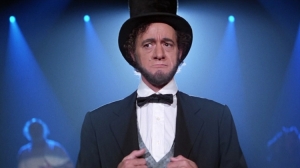 All these people got a brief glimpse of a world they had only dreamed of.  Some marveled over wondrous experiences and technologies, while others saw the future of their work and knew their work was not in vain.  And when they met their tragic fates, perhaps their minds flashed back (or forward) to a place and time that was full of promise, a world they helped to create.

At the end of the movie, Ted tells Bill that their time travel adventures haven’t changed them.  “Look at us.  Nothing’s different.”  Maybe not, but your new historical friends are definitely different.  They have hope.  And that, my friends, is indeed most excellent. *insert guitar riff*

Bill and Ted’s Excellent Adventure is owned by Orion Pictures. 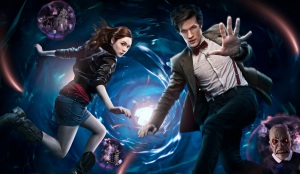 Can the complex sci-fi show Doctor Who be discussed intelligently in under three minutes?  The Nerd King finds out!

Based on the Trailer: Mr. Peabody and Sherman 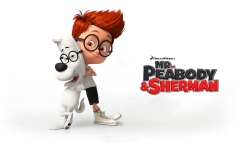 As a science fiction geek, I love the concept of time travel.  Whether it’s Doctor Who, Bill and Ted’s Excellent Adventure, or Star Trek, I can’t get enough of the wibbly-wobbly timey-wimey goodness inherent in messing up the space-time continuum.  Now DreamWorks is releasing a very special time travel movie, and this time, there’s a talking dog.  Because really, why not?

Mr. Peabody and Sherman tells the story of a super-intelligent dog and his human son bonding over saving the timestream from unraveling.  Is it a fascinating romp without a leash, or should we use a time machine to skip it?  Let’s take a look at the trailer and find out.  (To follow along, click here.)

So who stars in this movie?  Sherman is voiced by Max Charles, who some of you may remember as young Peter Parker from The Amazing Spider-Man.  Mr. Peabody is played by Modern Family‘s Ty Burell, and Penny Peterson, Sherman’s school rival, is portrayed by Burell’s costar on that show, Ariel Winter.  Other voices include Steven Colbert, Leslie Mann, Stanley Tucci, Patrick Warburton, Tom McGrath, and Mel Brooks.  The director is Rob Minkoff, the man who directed The Lion King and The Haunted Mansion.  So when he’s good, he’s really good, and when he’s not, he’s … he’s just not.  It all depends on how much he has to work with in this movie.

The trailer begins, unfortunately, with a dog pun from the narrator: “Mr. Peabody received his doctorate degree vale-dog-torian.”  Come on; if you’re going to phrase it like that, the pun you should use is “magna cum dog,” or even “received his dog-torate degree.”  Also, why are we still calling him Mr. if he’s a doctor?  We then see Mr. Peabody pioneering new techniques in alternate energy, inventing what appears to be the milk engine from that one episode of Phil of the Future.  I feel like PETA should be outraged over the treatment of that poor cow getting dragged behind the car, but then again, it was created by a dog, so they can’t say much.  And of course, we discover that Mr. Peabody is responsible for every aspect of modern culture that stereotypical old people complain about.  Looks like this generation really has gone to the dogs.

But of course, Mr. Peabody has trouble with the one great impossible task of the universe: being a father.  How does he have a human son, and why does the kid only call him Mr. Peabody and not Dad?  This trailer won’t explain, instead rushing us forward to dinnertime, when the two are joined by the Peterson family.  Unfortunately, Penny Peterson hates Sherman, which makes for awkward dinner conversation.  Mr. Peabody tells him to make the situation work, but warns him not to say anything about his time machine, the WABAC.  So naturally, Sherman takes her to the machine in the next scene.  Mr. Peabody, you need to take your son to obedience school.  They take the machine for a spin and come back dressed like Ancient Greeks after getting Penny engaged to King Tut in Ancient Egypt and running out of gas (or milk) in Ancient Troy.  Apparently, the WABAC’s only setting is Ancient.

To correct his son’s mistakes, Mr. Peabody takes the kids on another trip through time in order to rewrite history and save the universe.  Well, technically, it’s already been rewritten, so this would be re-rewriting history.  They start in Ancient Egypt, and even though Sherman already knows that Penny is engaged to King Tut, he has to be told who the boy with all the servants is and that he’s Penny’s boyfriend.  Shouldn’t that be fiancé, anyway?  And why is he so surprised and outraged when he should have already known this?  His main objection?  “His name rhymes with butt!”  Oh, good.  I was hoping for another butt joke in a children’s movie.  I will admit, though, that this isn’t nearly as bad out of context as the last two; it’s just really immature.  We then get a view of a Greek soldier’s armpit hair (ew) and a funny scene from Patrick Warburton involving Trojan horses.  I can’t tell if the jokes are naturally funny or if it’s just that they’re being delivered by Kronk from The Emperor’s New Groove, but that scene has me laughing every time.

As we move into the action montage, Penny and Sherman fly around on one of Leonardo DaVinci’s flying machines, Mr. Peabody duels with Robespierre and slices away his pants to reveal boxers, a castle gets blown up, and a boat goes flying out the tail end of the Sphinx (because we didn’t have enough gross humor in this film).  The plan goes horribly wrong as a hole in the space-time continuum brings all the major tourist attractions of the past to their hometown.  Actually, this is going to save a fortune on travel and tourism costs, although there is the slight problem of the universe ending.  Beethoven plays a dancing arcade game, George Washington high-fives Abraham Lincoln, and King Tut slams into the WABAC’s windshield.  The boy king expresses excitement to see Penny, but Sherman uses the windshield wiper to brush him off into the Circuits of Time.  Oh, so that’s how Tut died!  Archaeologists, wonder no more.  And the trailer ends with a police officer tasing Robespierre.  It’s funny because he’s French and says “ooh la la” when he’s in excruciating pain.  Wait, no, it isn’t.

So based on the trailer, do I recommend this movie?  Sort of, yeah.  It looks like a fun adventure romp, and it has some very talented people working on it.  At the same time, I can’t help but feel that this kind of “gather all the historical figures together” thing has been done better by Bill and Ted.  It doesn’t help that the film has this much body humor dragging it down.  While it’s definitely cleaner than many children’s films out there, it’s not a step in the right direction as far as I’m concerned.  DreamWorks has brought us works like Kung Fu Panda and How to Train Your Dragon that work in part because they steer away from that kind of humor, so this is somewhat disappointing.  As for director Rob Minkoff’s contribution, this seems less like The Lion King and more like The Haunted Mansion.  But for those of you not bothered by anything I’ve just mentioned, sure, go take the family to see it.  You’ll likely enjoy it more than I would.  Personally, I’ll be borrowing the TARDIS and skipping forward to rent this one on DVD.

Mr. Peabody and Sherman is owned by DreamWorks.